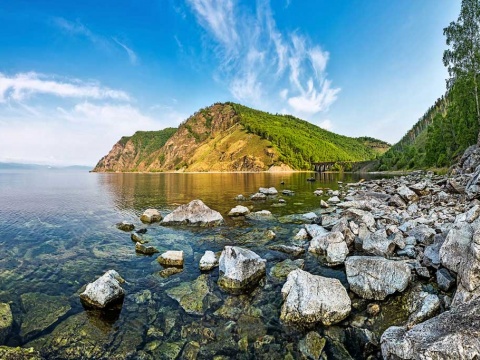 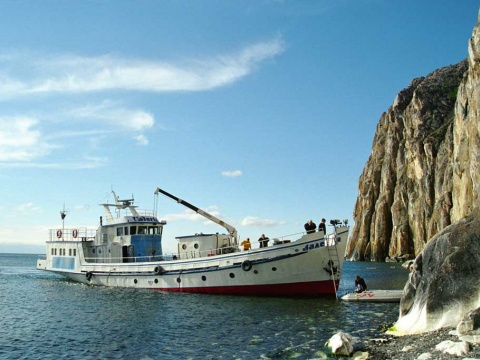 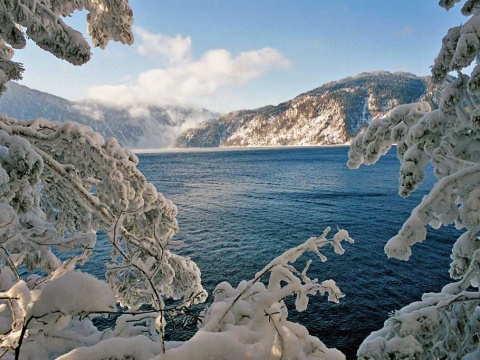 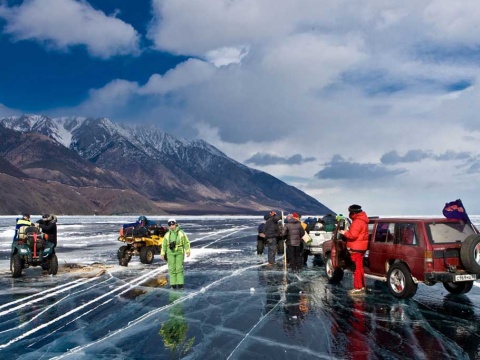 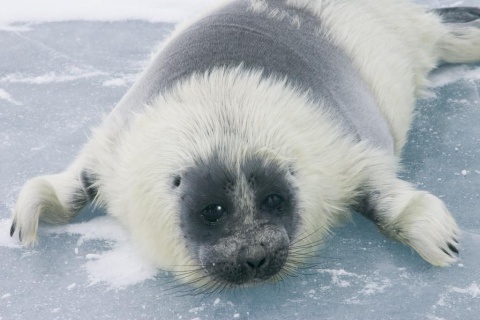 There are about 3500 species of plants and animals in Lake Baikal and about 84% of them are endemics, which means that they can be found  in Baikal only. According to the scientists’ research there are even more unknown species, as new varieties of organisms and plants are continuously developing in the lake.

The most famous endemic of the lake is a fresh-water seal, locally called “nerpa”. It has always been of great interest. Nerpa lives up to 55-60 years, while the average age of other seals from European lakes is only 30-35 years. It can stay under the water for about 70 minutes.

One theory holds that the seal came into Baikal from the Arctic Ocean through the Lena River, when it was a part of an integral system with the lake in prehistoric times. This theory finds support in the fact that chromasomic analyses and other data favor of the arctic-sea seal as its closest relation. However, there are many differences between the nerpas and related seals. The Baikal seals (especially females

) are more graceful! They also differ from others by the silver- grey colour of their skin and have 2 more litres of blood, which enables them to do without fresh air for almost 70 minutes.

Also Baikal has more than 1000 species of aquatic flora! Besides the algae, about 20 species of flowering plants have been found here. The lake's bays and silty lagoons, its sheltered coves, and the river deltas harbour such plants as thin reed, water buckwheat, cattail, hornwort, and sedge.

The most numerous inhabitant of the lake's water is a copepodae crustocean - the Baikal epischura. It is about the size of a manna-croup grain; size of 1.5 millimeters is 'gigantic' for it. However, it accounts for 96 per cent of Baikal zooplankton.

The epischura plays an exceptional part in Baikal's life circle. Without any exaggeration, one can say that the epischura is the major filter of Baikal. According to academician G. Galazy, a well-known scientist (Lake Baikal, 1979), "throughout the year all crustaceans of this species filter from 500 to 1000 cubic kilometres of the Baikal water or more, which is 10-15 times more than the annual in-flow of water from all tributaries." The epischura lives only in cold clean water with a constant chemical composition and high saturation with oxygen.

Golomyanka (oil fish). The most interesting of bullheads are these fishes! Golomyanka can be found nowhere else on the earth but in Baikal. It is unusually beautiful, sparkles blue and pink in sunshine. However, the sunshine causes it to melt! Only bones and a fat spot will be left if to leave this tiny fish under the sun. Golomyanka contains about 30% of oil and is rich in vitamin A. There was a time when Tibetian monks came to Baikal and gathered golomyanka along the shores. Its fat was used as a remedy for many diseases. Native Siberians used it as the fuel for their lamps, and also medicinally. Old residents said that long time ago, after the storms, golomyankas were picked alongside the shores, its fat was melted and used for treatment for rheumatism, atherosclerosis and for healing wounds. It is noted that golomyanka is very sensitive to water-temperature. Its optimal temperature is up to +5°C. If water-temperature is higher than +10 °C or higher, oil-fish cannot survive.

The fish is rather small in size (about 15-20 cm long), lives in extreme pressures and moves both vertically and horizontally even at the maximum depth of 1637 meters. Golomyanka moves up and down obeying the waves. During migrations the change of pressure leads to forced stops necessary for the adaptation to existing conditions. At night Golomyanka rises to the water surface, and at daytime it swims down to great depths. Each autumn the females, being viviparous instead of laying eggs, produce 2000-3000 of larvae and die afterwards. 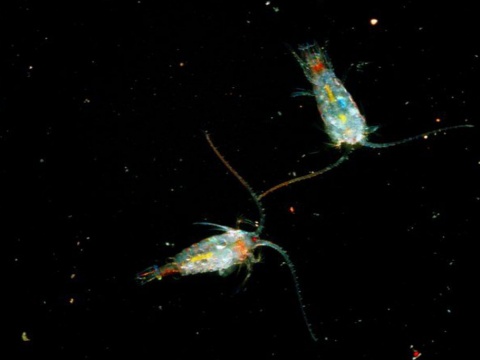 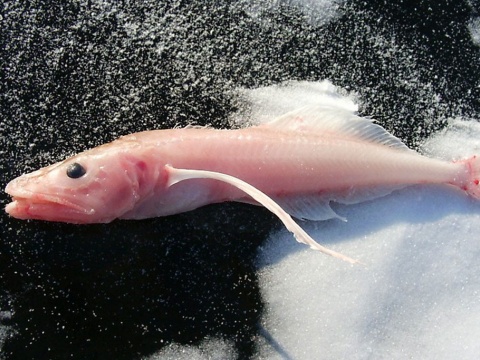 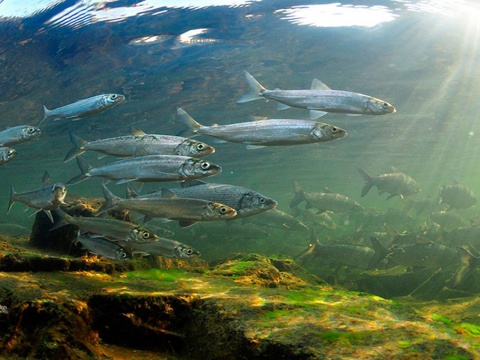 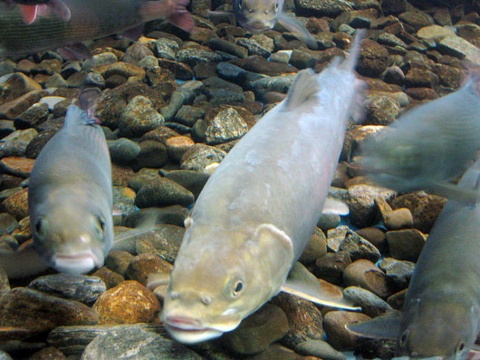 Omul fish has always been (and still is!) the main symbol of Lake Baikal!

It lives up to 18-20 years. Scientists say that the ancestors of omul got into Baikal from the polar regions - Arctic ocean. One theory is that there was a time when a group of omul, going with the stream up Arctic rivers to spawn, came to Baikal and favoured these conditions for breeding and development. Probably the route of infiltration of this fish drove on Yenisei and Angara rivers. Omul's "colonization" of Baikal and its adaptation to new living conditions appeared to be Nature's tremendous experiment, revealing flexibility and adaptability of aquatic organisms to changes of the environment. Omul biomass in Lake Baikal by data of the survey made on May 25 - June 5, 1999 = 26000 ton (300 000 000)

The Baikal shores can be considered to be a unique ecological niche, where its inhabitants are connected with both dryland and water. Some of them live on land but feed in water, others spend the greater part of the time in water but breed and end their lifetime ashore. Due to its unique location, the land animals of the Baikal region contain specimens of the fauna found in Central Asia, Europe - Siberia and Eastern Asia. Furthermore, the taiga near-lake backwoods are inhabited by rare animals which have become extinct in other places.

Among the upland high ridges, the mammals most widespread are mountain goat, snow sheep, Alpine field-vole, marmots, and in some places - lemmings. In summer on the slope and valley zones one can come across big ungulate animals and their predators, brown bears in particular. 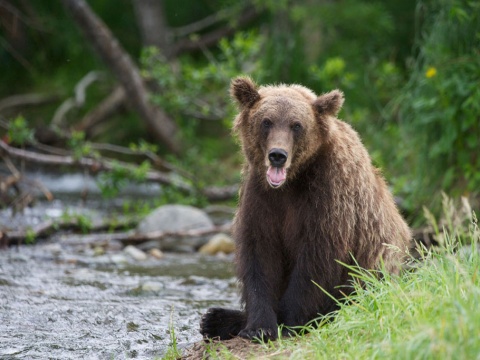 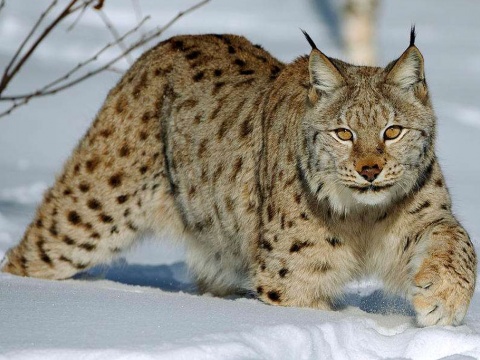 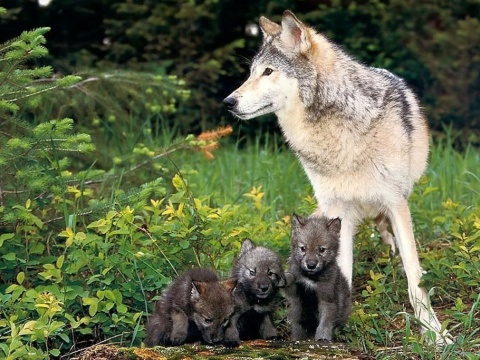 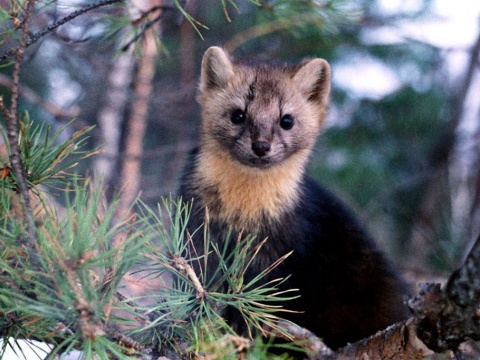 Bears are highly territorial by their nature and each bear has its own area that it uses and protects.

The bear generally weights about 200-300 kilos. When it enters hibernation, it may weight 60% more than it did a few months earlier. In late autumn they retire to their winter dens. It’s often just a space under or over a hanging rock, or a fallen tree. Bears are not true hibernators and may be aroused easily without too much difficulty. However, their heart beat, breathing rate, and temperature are all depressed. This slowdown of body functions helps to conserve the stores of fat. Local bears leave their dens by mid April or early May.

A female bear may give birth to cubs in late January. The cubs are tiny - about the size of chipmunks; and they stay with their mother through the summer and then share the den in the following winter. Mother and father have full charge of the young.

The Wolf is a member of the dog family. These animals are divided into packs which are believed to be family groups. Each mated pair produces a litter of about 5-6 pups in May. Wolves are highly social by nature. Each pack is well-organized and has its most dominant and submissive family member. Research has shown that a wolf is not a reckless killer of wild life and therefore it’s prey is mostly old and sick animals. Wolves are stimulated to chase any animals that will run from them.

Siberian forests are also famous for 69 species of fur bearing animals. 29 of them are found in Baikal region.

At the most inspired hour, Nature presented the world with sable - the most typical and valuable inhabitant of the south Siberian mountain taiga. What does this little animal mean to Russia? Actually, a lot! Russians followed the sable trail throughout Asia to the Pacific Ocean. In the XVII th century fur-trade made up half of the national income of Russia. Salaries were paid in sable skins, debts were also repaid in sable; Russian tsars presented the nobility of Europe and East with sable.

Sable fur is valued not only for its beauty, but because it is rather practical and durable. Nowadays, there is a great demand for sable at international fur auctions. Sable, or the "fur-king" as it is sometimes called, was awarded several gold medals.

It is not very easy to see a sable in the taiga. It's a very careful and extremely secretive predator. Sable hunting requires special hunting skills, endurance and also good knowledge of the animal's habits and habitat. 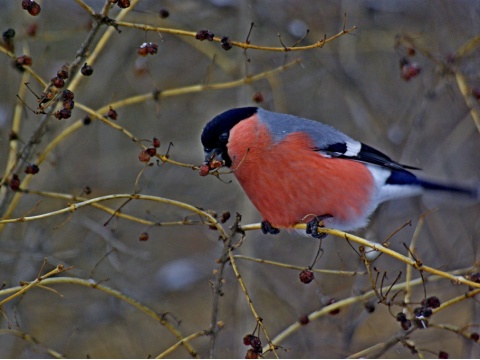 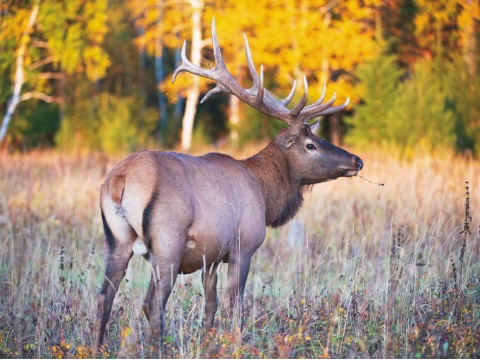 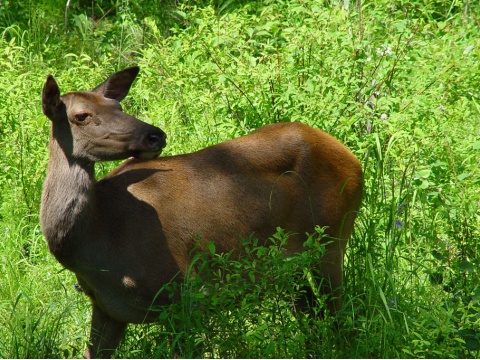 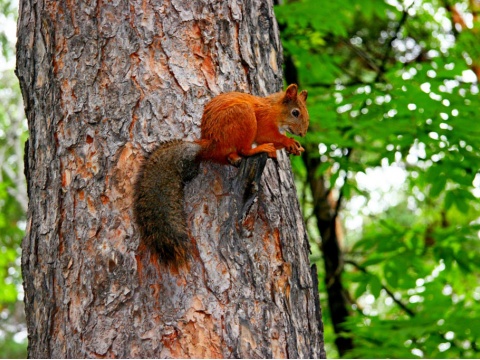 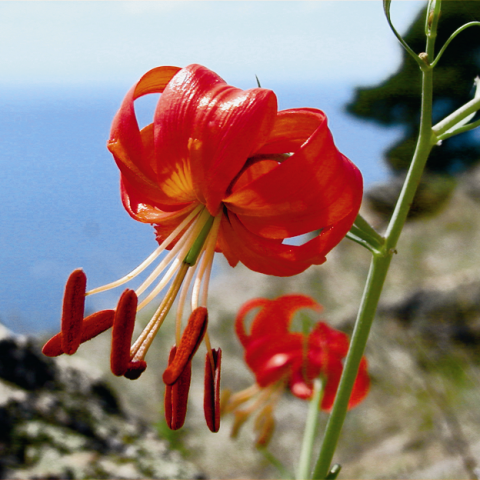 Nature is very generous to Lake Baikal! Necklace of coniferous forests, decorating the shore mountain chains, creates a unique beauty of landscapes, shelters animals and birds, and enlivens the surroundings. The pride of Pribaikalye is the taiga forest. The light green of larch, birch, poplar and alder trees growing in the lower belt, covers the slopes. Higher up it is replaced by a belt of dark coniferous forest - cedar, fir and spruce. Up this belt the slopes are covered with impassable brushwoods of trailing cedar, through which only bear-trails run. Above them on the gentle sloping terrace there are Alpine grasslands with parterres and finally, snowcovered peaks.

In contrast to European new woods the Baikal taiga has preserved trees of all ages - from young ones to 500-600 and even 800 year old giants. It is the only place where pine forests (with the world famous Angara pine tree) extend. Its timber has no match. In the undergrowth of pine forests, on the former burnings and clearings, one can come across rich red bilberries and on the hillsides, fern thickets.

Mixed pine-birch and birch-aspen forests have a rather wide spreading, as it is a stage of indigenous pine reforestation.

The most precious woods in Pribaikalye are cedar groves. The major forestry areas are located in the east of the Central Siberian Upland.

Spruce-trees are the least in Pribaikalye. They grow mostly alongside cedar, larch and sometimes, pine trees.

Meadowland vegetation is firstly water meadows along the valleys of big and small rivers, located mostly near hamlets and villages.

Marshes in Pribaikalye dominate in cold areas. The taiga swamps are rich in cranberries and fragrant currants. 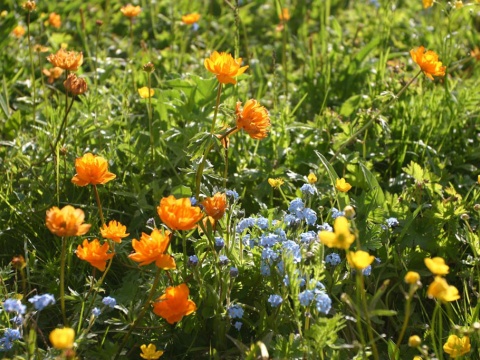 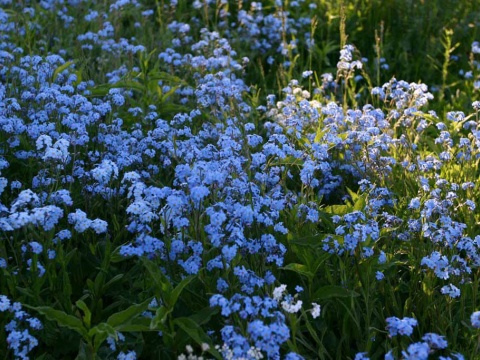 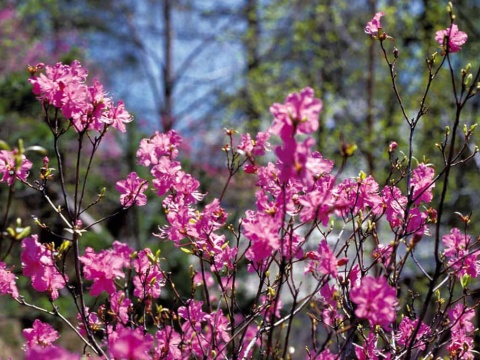 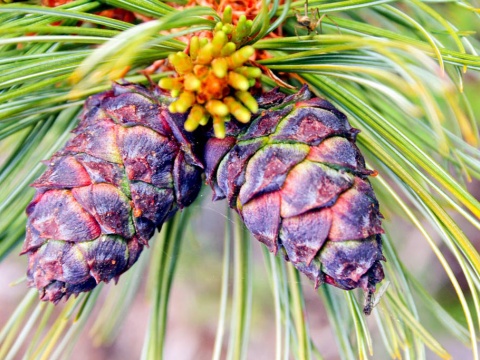